Helping society one vegetable at a time. Are you willing to do your part too?

In 2004 from humble beginnings, Ronni Kahn delivered roughly 4,000 donated meals to the hungry with just a single van throughout Sydney, Australia in the first month of operations. Kahn dedicated herself to the cause of wanting to help those who needed it. Nearly 15 years later, her company OZ Harvest Limited has become Australia’s leading food rescue organization. Her story of giving back to the community can help inspire people across the world, however, what if I told you that this success story inspired such individuals much closer to home than you realize? 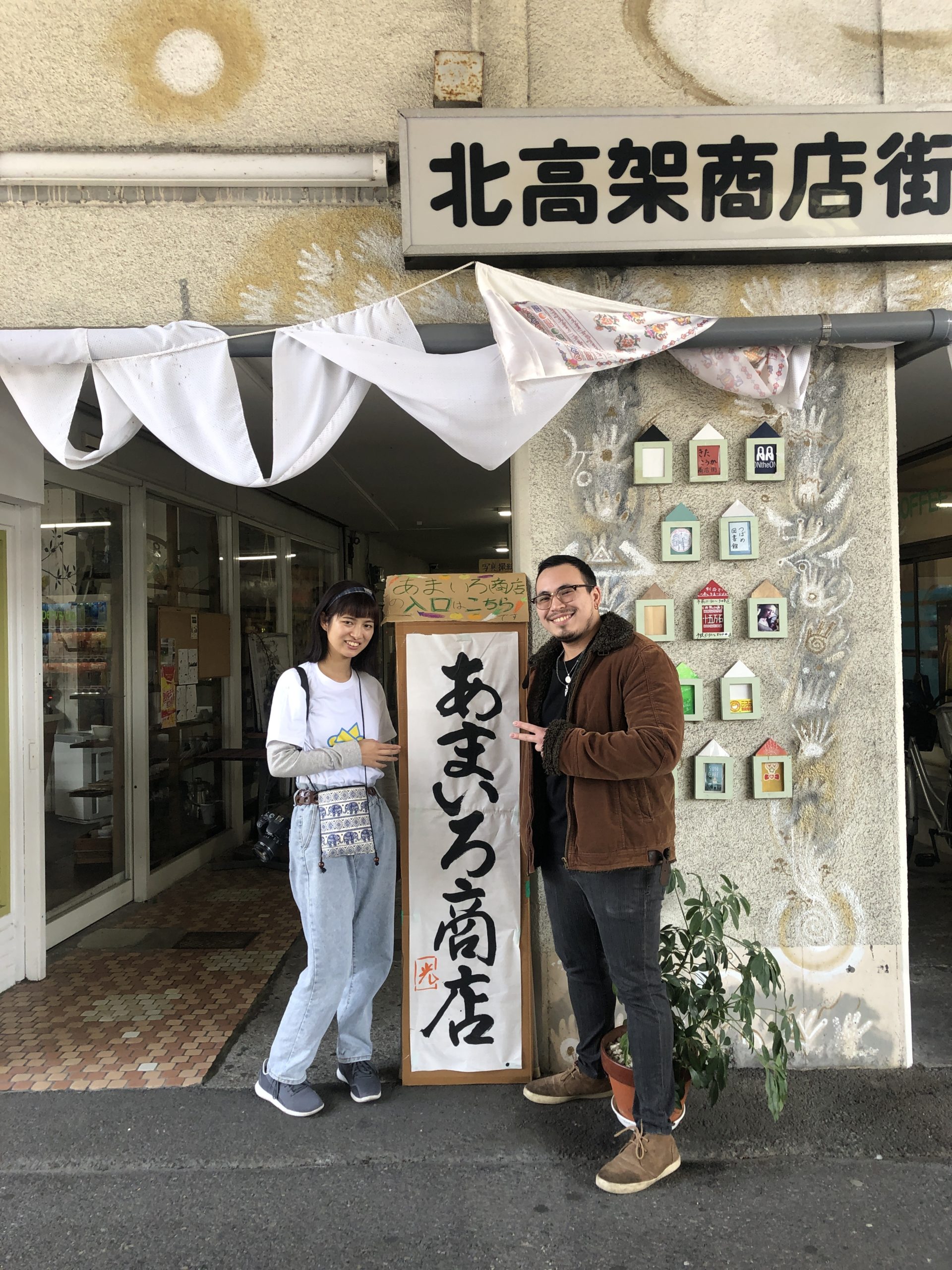 We are going to introduce you to the founder of "Amairo-Shoten", Hikari Furukawa.

Her inner passion and feelings for social contribution

Hikari is just one of the 5,500 Asia Pacific University (APU) students that live in the charming coastal city of Beppu, Oita. Hikari like the vast majority of University students often has to balance the many responsibilities that continue to pile up from going to classes, paying the rent, spending time with your significant other, and feeding the cats every day. However, despite the tremendous struggles that come with being a 3rd Year University-student, she finds time to work on her own social-initiative project: Amairo Shoten to help her local community and city she cares for.

How the Amairo store works. There are various customers, such as elderly people in the area and international students. Connections are created through the event.

What inspired Hikari, an undergraduate student, to start a project like this? 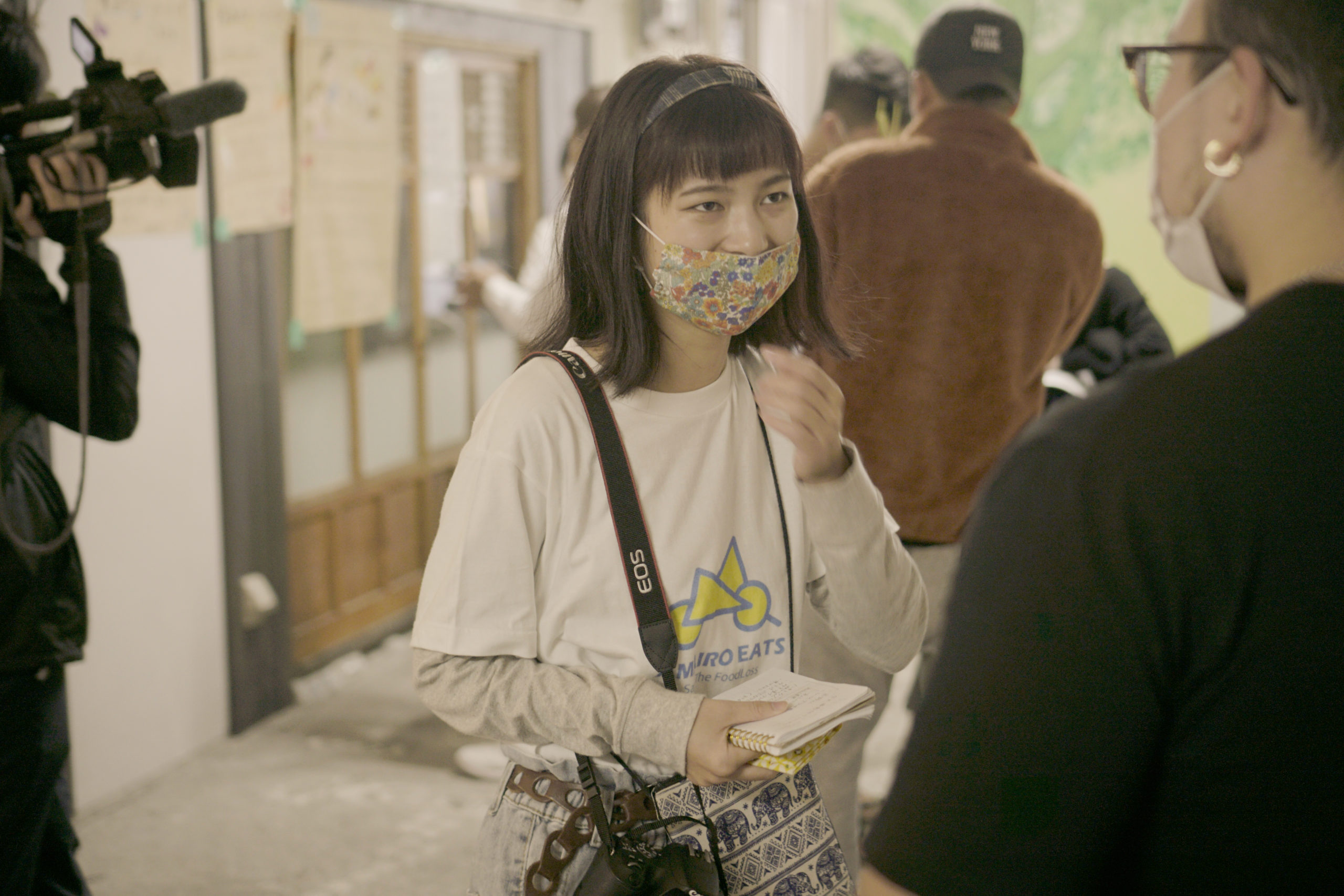 Hikari enthusiastically answered the interview during the Amairo Shoten event

“I really wanted to solve a social problem such as food waste and poverty. I was saddened when I noticed these problems in Japan too.”

Tackling such a huge social-problem as this sounds like a challenging task, so we wondered how difficult it might be as a student. “School isn’t so difficult, but I use my free time to work on Amairo Shoten. I find the work fun & fulfilling, so it’s easy for me to balance my school life and this project.”

Just like the operations of the OZ Harvest Organization in Australia, a lot of organizations and people are involved such as the farmers that produce the food, the supermarkets, and restaurants that donate excess food, and the collectors that distribute the food to the needy. Many components are needed to make this project work and so we asked Hikari how she managed to bring them all together “I spoke to people and persuaded them to contribute to society & being part of the solution.”

She employed various methods to persuade others to join her cause through talking, the use of SNS, and even presentations. Hikari herself is soft-spoken and exudes a humble demeanor, yet one can understand how she managed to persuade people to support her cause because of how authentic she is in her approach. She tells you the truth, explains the problem, and invites you to become a part of the solution. 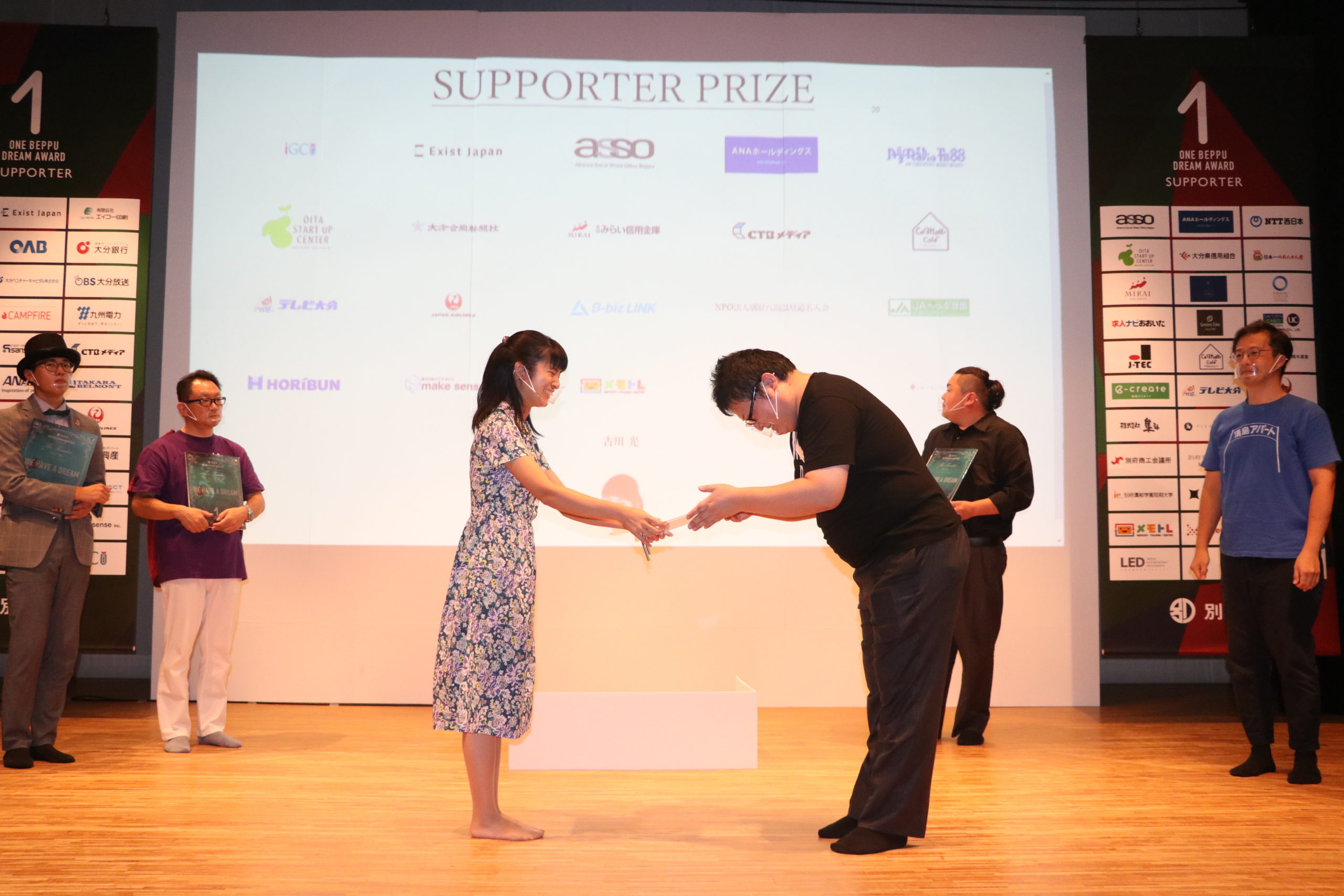 At the business plan contest "ONE BEPPU DREAM AWARD 2020" held in October 2020, Mr. Hikari's presentation was highly evaluated by many companies.

A challenge that was possible only in Beppu, which is both a tourist city and a "tolerant city" 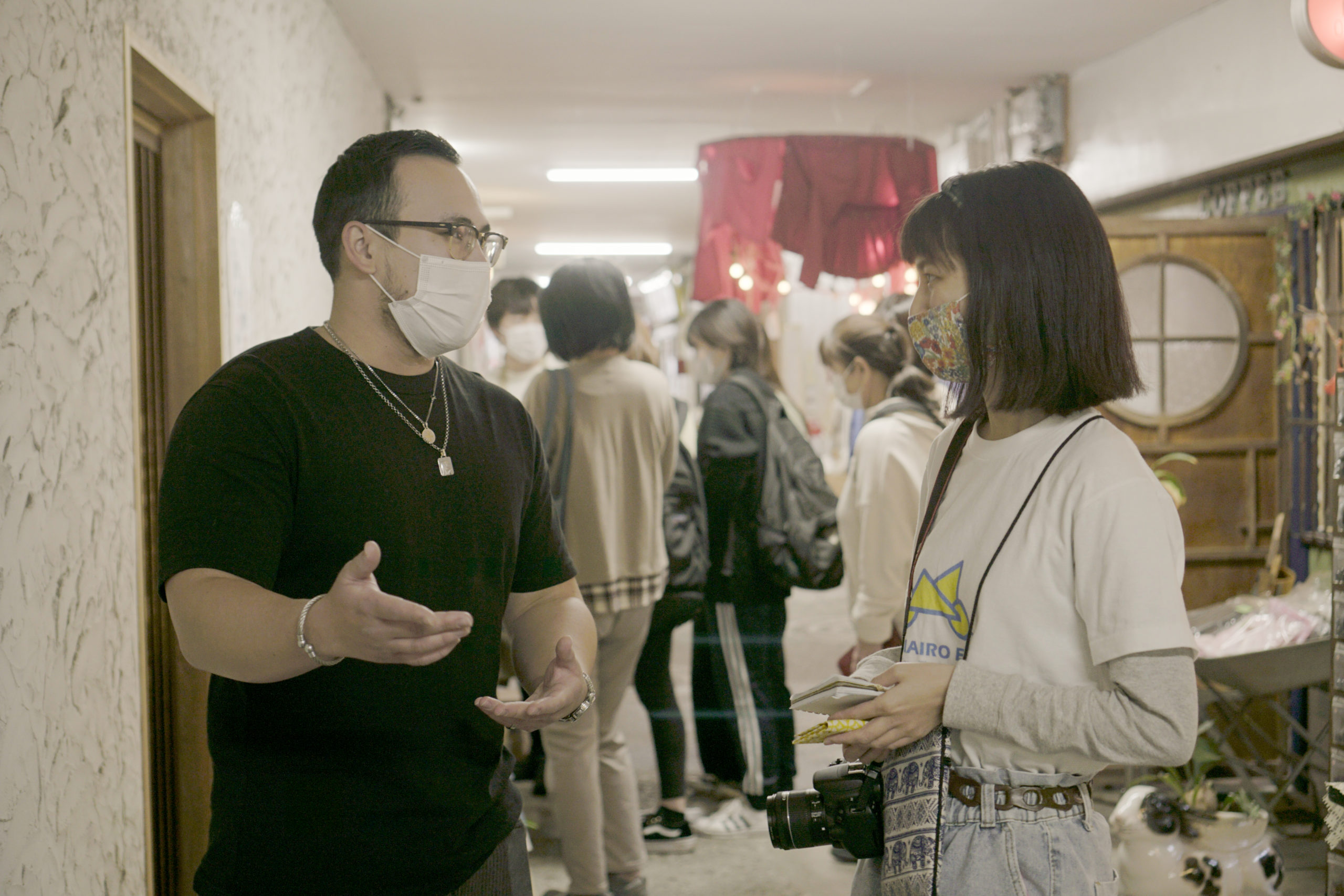 As we visited Hikari in a tucked alley-way near Beppu Station where the event was held, we were pleasantly greeted by the large swaths of people all wanting to take home some vegetables for dinner. We had to patiently wait for Hikari as she was busy speaking to customers while keeping the operation going as smoothly as possible.

The answer to our question as to how Beppu and its citizens have reacted to Hikari’s call to action was already in full display with several people picking up vegetables and listening to presentations by volunteer staff members of the project. These people that supported Hikari and the project all agreed with her views “People tend to think that food loss and poverty are major problems, but in reality, it's up to each of us to change these problems little by little, so it's not just a matter of someone else doing it, you can change it with your own actions” she said during the interview. 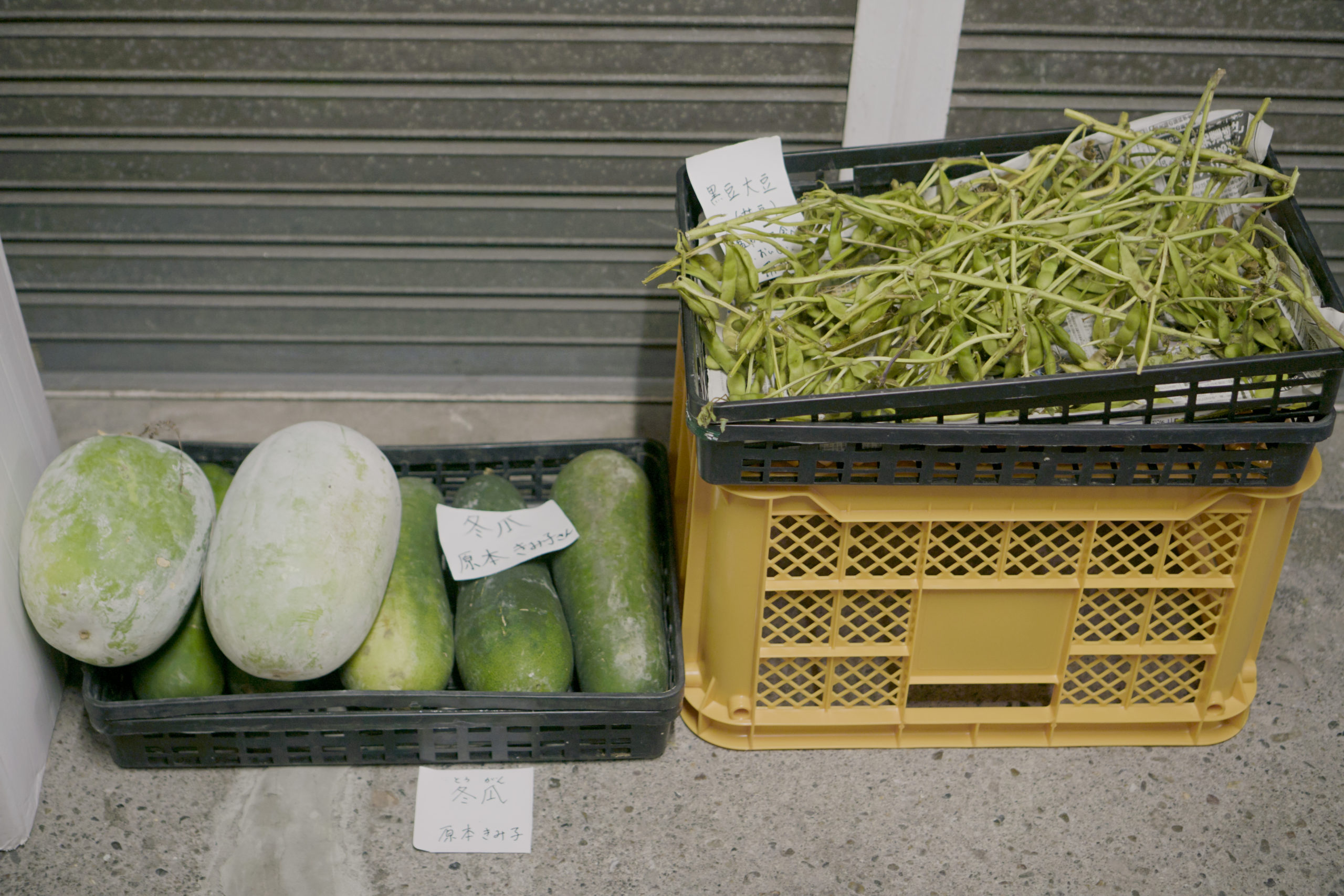 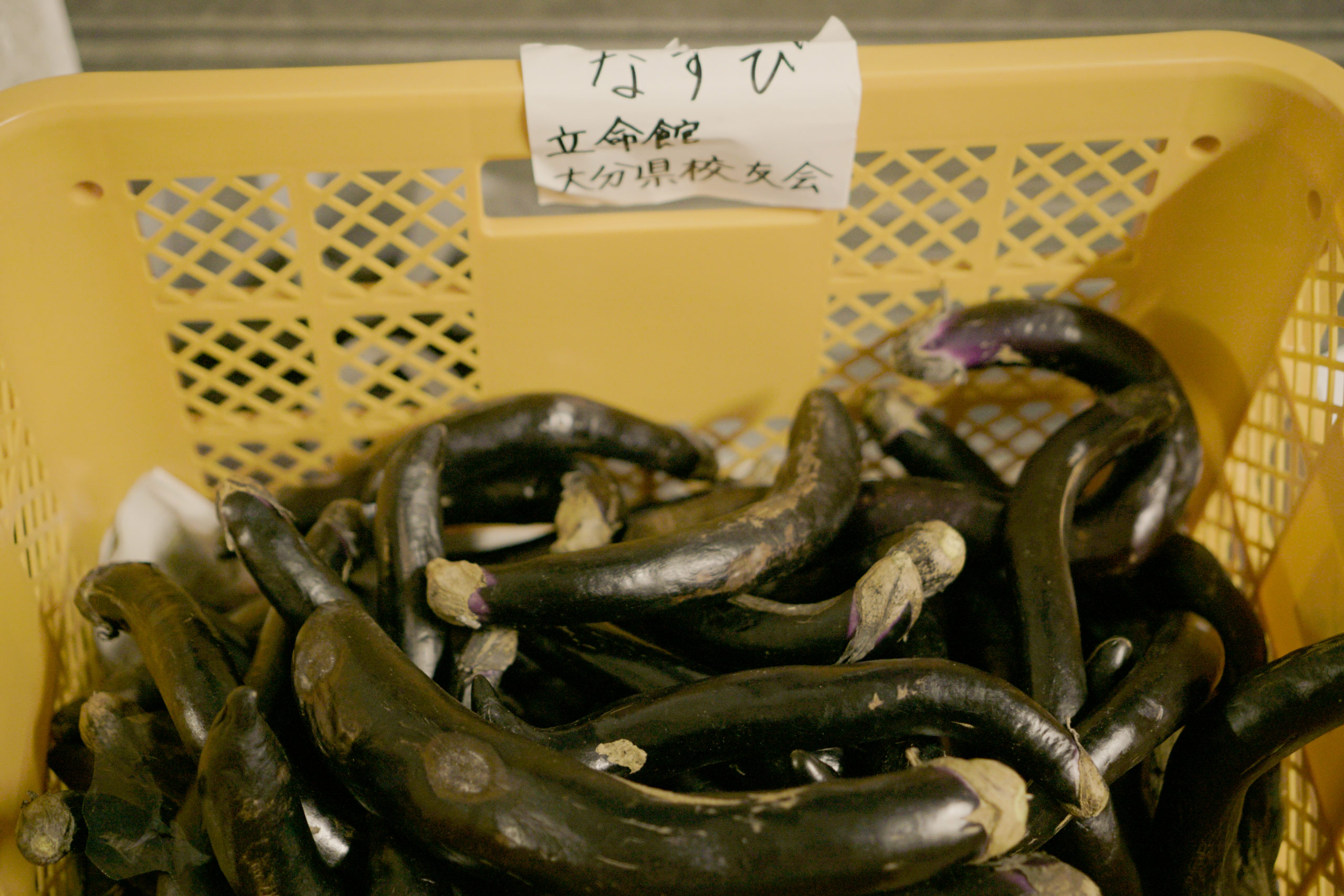 At Amairo Shoten, you will find a lineup of foodstuffs that are wasteful to be disposed of as they are. Another major feature is that many farmers provide these agricultural products.

Having moved from Saga to Beppu to study, we asked Hikari “Why did you decide to hold the event in Beppu instead of your hometown of Saga?”

She stated “At first it was just because I was in Beppu. It was something I had wanted to try since I was in my hometown, so I took a chance and told people in Beppu about it. And then everyone said, “Let's do it, it'll be fun!” These voices gave me a lot of strength. People in Beppu like new things and are interested in social activities.

I couldn't agree more with Hikari’s feelings about Beppu being a great place because citizens already have already resonated with Hikari’s call to action. "I didn't know about this food loss situation, so I should be aware of it too” people who believe in the project stated, and so Hikari hopes that the people who support her will continue to help influence and spread awareness to others and do the same. 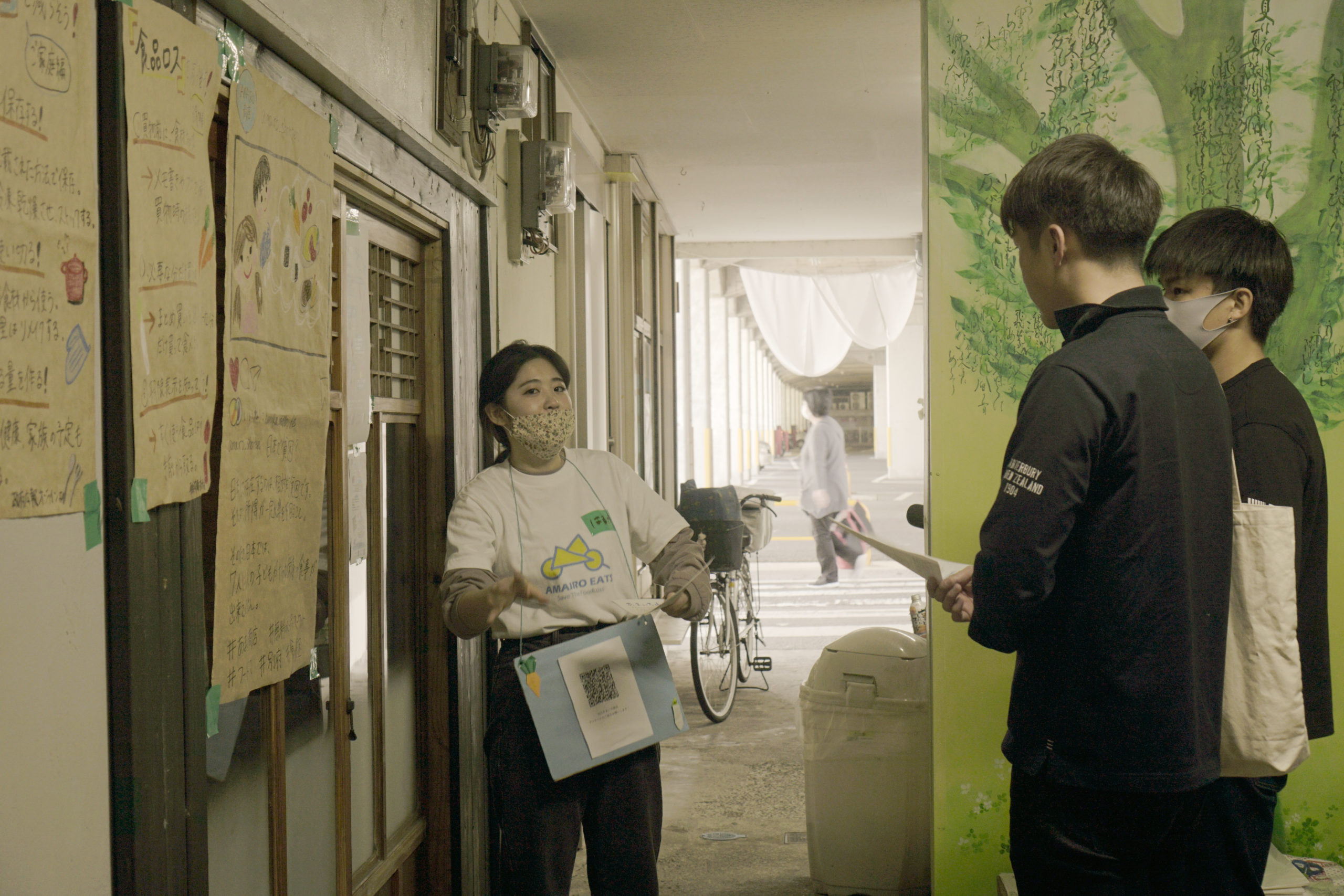 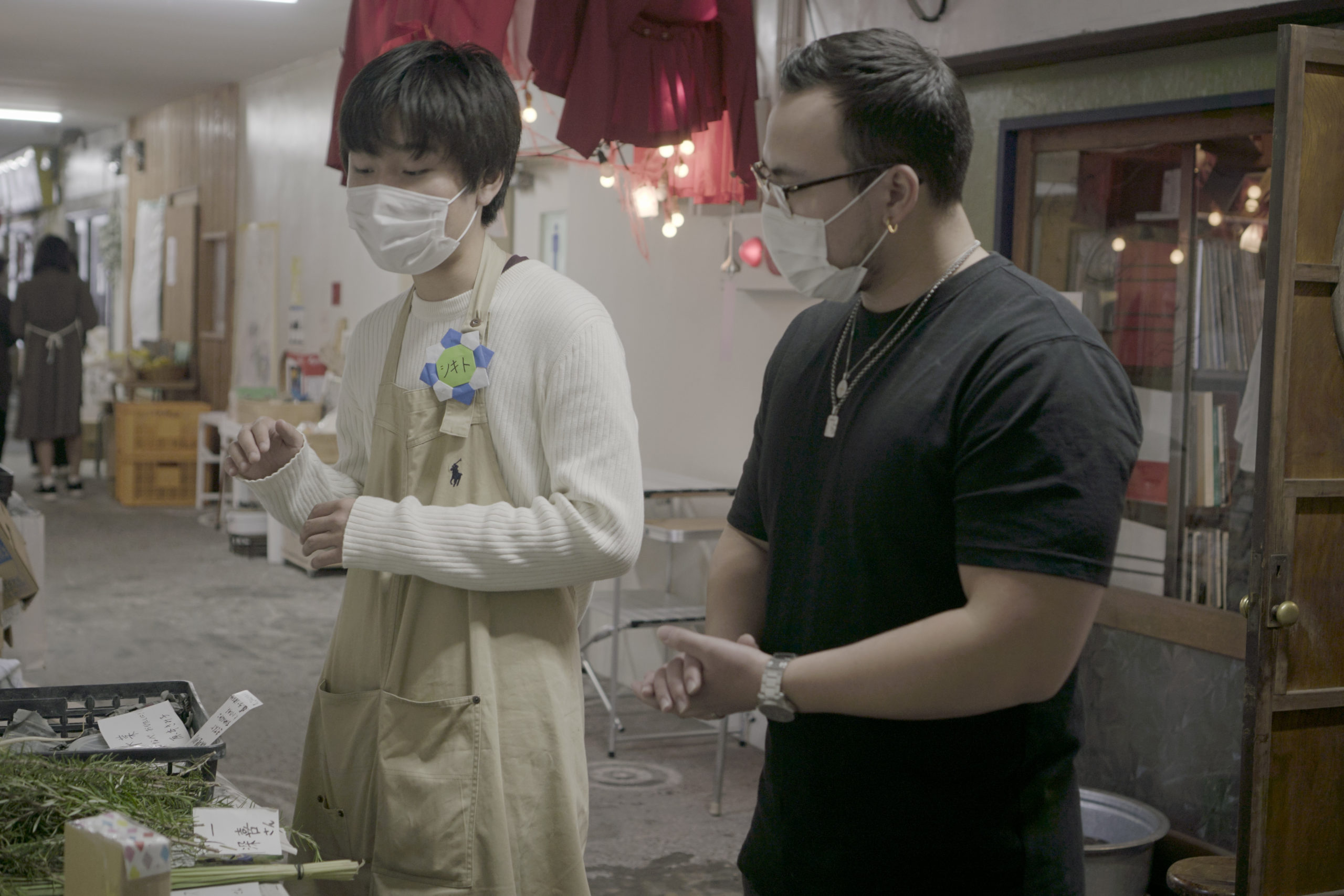 Many members who sympathize with Mitsuru's thoughts are participating in the project.

The goal is to build a sustainable "food loss elimination system" that anyone can work on.

Despite the great response and support she has received since Hikari started the project last year in June 2019, the future still remains in doubt. She has managed to balance her school and work-life to the best of her abilities and has kept Amairo Shoten going to this day. We asked her “Are you worried about the future?” and she responded by stating that she does intend to begin her job-hunt next year while doing this project so she can’t promise that she will continue to lead Amairo Shoten once that time comes.

However, before that time comes, she still has an entire year before graduating from University and has already stated that she will not give up on her mission of spreading awareness about these social problems. She is already planning another event coming soon in March 2021, and it should be even better than her last event in November 2020. She is currently working and designing an effective-system that can continue to function without her around physically around to lead the project. She feels confident and places her hopes and ideals in the next generation of recruits who may one day pass this same mission to the generations that follow. The future's looking bright and we all have an opportunity to help and make a difference. So, are you willing to be a part of the solution too?

Following Hikari’s journey and her desire to give back to society should inspire others to help her achieve her mission. We are pushing a call of action upon everyone from townsfolk to entrepreneurs to support her in any way they can. Like how Hikari has invited others to join her, you too can be a part of the solution.

I have traveled all over Japan from Hokkaido, Sapporo to Kumamoto. It's my mission to visit nearly everything worth visiting in Japan! Next stop: Kagoshima.

I have a passion for traveling and discovery. I have been to over 20 countries so far throughout Europe and Asia. Japan is easily my favorite destination, its beauty and culture are captivating. I want to see everything this country has to offer!